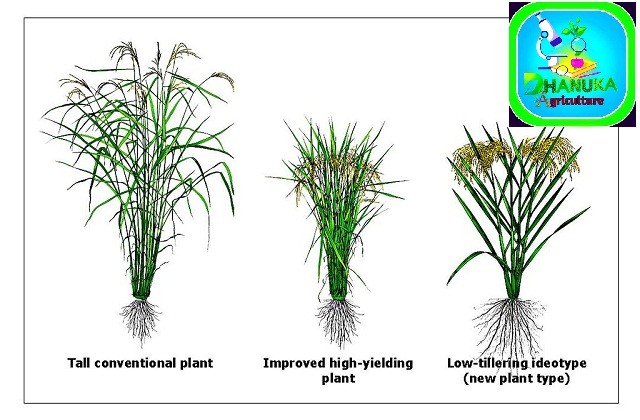 Reasons for the low yield of crops-

1. Poor genetic yield potential of varieties of different crops.
2. Under identical conditions, the genetic makeup of a variety is the most significant factor in determining yield.

In recent years due to all-round efforts of agricultural scientists it has been possible to cultivate HYVs of cereal crops which are often been termed as “NEW PLANT TYPES”.

1. IDEOTYPE:  refers to plant type in which morphological and physiological characteristics are ideally suited to achieve high production potential and yield reliability.

2. NPT’s are also called as fertilizer responsive varieties since these NPTs possess the trait of high responsiveness towards heavy fertilizer applications.
3. NPT’s are also termed as adaptable varieties means the physiological attributes of variety responsible for
a) Controlling the assimilation of absorbed N in the plant body.
b) Translocation and storage of photosynthetic products.
c) Possessing more activity of roots under heavy application of fertilizers.
d) Availability of resistance to lodging and diseases.

low yielding potentiality due to:-

1. Weak and tall straw, susceptible to lodging under heavy fertilizer application.
2. Inefficient leaf arrangement responsible for the poor photosynthetic activity and less utilization of Solar energy.
3. Many associated attributes like unsynchronized susceptibility towards the attack of pests and diseases.

NPT’s do not possess:-

these defects and were similarly improved to growth their manufacturing efficiency wherein the morphological framework has been genetically linked with different yield contributing characters.

The successful efforts of altering the morphological architecture of crop plants and making them suitable for cultivation under the high fertility status of soils have opened a new VISTA in developing the varieties suitable for good agronomy.

CHARACTER OF NPT’s: They should be

Important features of such NPT’s of cereals in grain crops are :

NPT’s are dwarf in nature due to NORIN in wheat and DEE-GEE-WOO-GEN in rice dwarf genes.
NPT’s are short, stiff, not more than knee-high but could take more fertilizers without lodging.

NPTs are the narrow, thick, erect and dark green color with optimum LAI composed of properly arranged leaves, which remain active for a longer period after flowering due to high sunlight interception they play an important role in supporting grain formation resulting in more number of fertile grains per ear head.

NPTs are more or less rhythmic i.e., high germination %, the formation of all tillers at a time (during a specific period) and timely maturity of all the tillers.

So, they have the highest synchronized coefficient as regards to the development and maturity of grains of different ears of a plant. Synchronization of tillering has been found to be dependent on other factors like moisture, proper secondary regrowth and adequate nutrient availability during the period.

Traditional tall varieties under heavy fertilizer applications produce more sterile florets. NPT’s have a very low floret sterility % due to synchronized tillering into uniform ear head formation supported by longer physiological activity if leaves at maturity. Low floret sterility and in NPT’s have also been
attributed due to increased activities of roots at the grain formation stage.

NPT’s have a shorter duration than tall varieties. The optimum growth duration of a variety is more
important for scheduling its irrigation and manuring for obtaining higher yield.

All most all NPT’s are photo insensitive and completely resistant to fluctuations in day length. They
can be grown under all crop seasons

NPTs have no dormancy i.e. they do not require any rest period, called dormancy period. The freshly harvested seed can be used for sowing. This character is useful in seed multiplication programs of HYVs, within a short span of time.

This along with photo insensitivity makes them quite suitable for adaptation under high-intensity cropping programs.

8. EFFECTIVE TRANSLOCATION OF FOOD MATERIAL FROM PLANTS TO GRAIN :

NPTs have the higher potentiality to absorb and assimilate nutrient from the soil throughout the growth duration which in combination with higher photosynthetic activities enable them for higher dry matter production.

The built inefficient plant mechanism in NPT’s coupled with fewer organs respiring at the flowering stage permit more efficient use of respiration for growth and grain production.

in case of After flowering, this enables effective translocation of accumulated food materials of straw for grain formation.

NPT’s are generally dwarf in growth habit with a strong and stiff stem which provides them considerable resistance against plant lodging.

NPT’s are capable of yielding 2-3 times more grain yield in comparison to local tall improved types. This is probably due to their altered morphology which results in efficient utilization of water, nutrients and radiation and increased metabolic activities with high dry matter production.

The only drawback related to NPT’s is the sickness susceptibility with luxuriant vegetative growth; the sorts offer scope for insect pests and sicknesses.

Ex., attempts are being made to boom disease-resistant NPT’s.

The handiest downside related to NPT’s is the disorder susceptibility with luxuriant vegetative growth; the types offer scope for insect pests and diseases. Ex., tries are being made to increase disorder-resistant NPT’s. 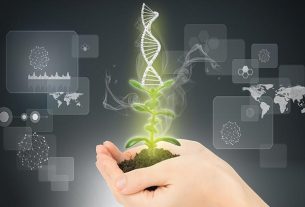 what is plant breeding ?