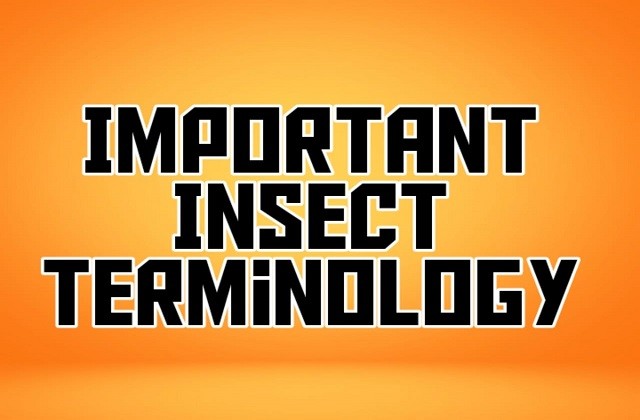 The third (hind) body region. Composed of as many as 11 segments and lacking legs or wings.

Cell—An area in a wing between veins.

Cercus (pl., cerci) —A thread-like or sometimes forceps-like tail near the tip of the abdomen (usually a pair).

A type of insect development in which the insect passes through the stages of egg, larva, pupa and adult. The larva usually is different in form from the adult.

Compound eye—An eye with many individual elements or facets.

Cornicle—A short, blunt horn or tube (sometimes button-like) on the top and near the end of an aphid’s abdomen. Emits a waxy
liquid that helps protect against enemies.

Elytron (pl., elytra)—One of a beetle’s leathery or hard front wings. Usually coversa hindwing when at rest and sometimes called a wing cover.

Furcula—A forked “tail” on the underside of the abdomen of Collembola (springtails), used for jump

Haltere—A small, knob-like organ (sometimes shaped like a baseball bat or bowling pin) located on the thorax of Diptera.Takes the place of hindwings and helpsbalance the insect in flight.

Honeydew—A sticky substance excreted by
aphids and some other insects.

The first pair of jaws: stout and tooth-like in chewing insects, needle- or sword-shaped in sucking insects; the lateral (left and right) upper jaws of biting insects.

Membranous—Thin like a membrane. Clear or almost clear enough to see through, like cellophane or clear plastic sheeting.

Mesothorax—The second or middle thoracic ring, which bears the middle pair of legs and the first pair of wings.

Metamorphosis—The changes through which an insect passes from the immature or egg form to an adult.

Metathorax—The third or last thoracic segment. Joined to the abdomen. Bears the hind pair of legs and second pair of wings or rudiments of these wings, e.g., the halteres found on flies (Diptera).

Molt—The shedding of skin during growth.

Nymph—The active feeding and growing stage of insects that go through simple metamorphosis.

Ovipositor—Tube from which a female insect deposits her eggs.

Parasite—An insect that lives in or on another animal and damages its host.

Pheromone—Vapor or liquid emitted by an insect that causes a specific response from a receiving insect. Some pheromones are used to find a mate. Also used in pest control products.

Predator—An insect that eats another insect.

Proleg—A fleshy, unjointed false leg found on caterpillars (hooked) and the larvae of some sawflies (lacking hooks). Used for clinging to surfaces and for support in locomotion.

Pronotum—The upper side of the prothorax.

Pupa—The stage between larva and adult in insects that go through complete metamorphosis.

Segment—A joint or division of an insect’s body, leg or antenna.

A type of insect development in which the insect passes through the stages of egg, nymph and adult. The nymph usually resembles the adult.

Tarsus (pl., tarsi)—The “foot” of an insect; the last, small segment or joint near the end of the leg. The number varies from one to five.

The second or intermediate regionof the body, found between the head andabdomen; it bears the legs and wings if present. Made up of three rings or segments:first, prothorax; second, mesothorax; and third, metathorax.

Vector—An insect that carries a disease organism from one plant or animal to another.

Vein—The rod-like or vein-like stiffening or supporting frame of a wing. 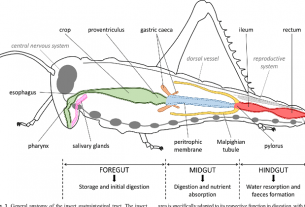